Illinoiscornhusking.com is being updated at this time.


Today corn is harvested with the aide of Global Positioning Systems and computers. A little over fifty years ago it was still being done with horses pulling the wagons. While a lone figure wearing a corn husking hook would pick two to three rows at a time. With a musical like rhythm each ear was hooked, cleaned of husks and flipped into the wagon. From sun-up till sundown it was the time of the corn husker. 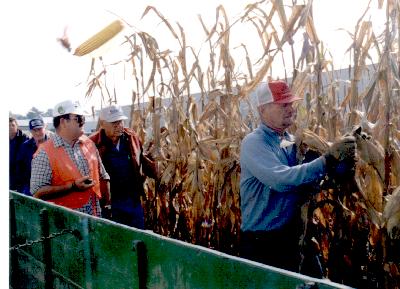 Illinois State President, Dick Humes, timing for Hank Endres. Hank was one of the four people to pick 50 bushels in an 80 minute contest during the 1940's.

The 30th Annual Illinois State Cornhusking contest will be held Sunday, October 3, 2010 south of Roseville Illinois on the Harlan and Barb Jacobson farm.

The Illinois State Cornhusking contest will qualify contestants for the National contest. The contest will start at 9 AM. Registration starts at 8 am with the drawing for the first lands at 8:30 AM .

Practice will start at 8:30 AM and last for 25 minutes. Each contestant will be able to husk from 1 to 2 minutes depending on the number of contestants.


The 2010 National Contest will be held October 16th and 17th, 2010 at Oakley, Kansas . For more information go to Cornhusking.com

How to Pick Corn

There is an art to picking corn by hand. Bill Gillen and Bob St.George have taught several people how to pick by hand. The links below give a short description about some of their techniques. There are many factors that determine how fast a person can pick. It is easier to go to a contest and watch a husker throw 40 to 50 ears a minute than to describe each move that makes them fast.


The organized corn husking contest was originated by Henry A. Wallace ( later Secretary of Agriculture ) in 1922 as a way to demonstrate who was the best corn husker. When farmers gathered in the 1920’s, tales were often told of a friend or neighbor who was an outstanding picker. Often, it was the last person to tell their story who actually could pick the biggest load. Picking over 100 bushels a day, scooping it off, was considered normal for the good huskers.

Books about the cornhusking contests.

THE NATIONAL by Mitchel Burns is about the modern cornhusking contests.
Leonard J. Jacobs has written two books and several articles on the corn husking contest that took place from 1924 - 1941.The contest were 80 minutes in length during those years and crowds of 100,000 people or more would attend the National Contest. His two books are Battle Of The Bangboards, published in 1975 and Huskers Digest, published in 1998. For more information contact Frank at 309 -426-2773


If you need more information E-mail Frank at: thumbhook@yahoo.com